Pretty much the last thing this planet needs, is more plastic. Convenient and cheap as it may be to produce, the price we’re paying for it is higher than we should like. It’s an unavoidable material, unfortunately. But I try to avoid it when I can. Which is a lot less often than I like.

It’s very early days, still. Extremely early, actually. But it puts a smile on my face.

Those who went trough the effort of reading multiple posts on this site, may have noticed I’m pretty much always ranting about 35mm cameras. Nearly all sample images when jabbering about the films and developers I like are shot on 35mm film.

And yet I seem to care about the technical qualities of my images, So why I am not shooting larger formats?

In fact, I am, though extremely sparingly. Up to a couple of weeks ago, I had one medium format camera, a TLR (twin lens reflex). Not a bad camera in any way, but I don’t enjoy using it massively, and I was struggling to get results out of it which wow-ed me. So, the key reason to shoot medium format being the quality of the negative wasn’t materializing for me. Most probably my technique failing me, but it’s also not making me feel an urge to improve.

And so I shot less and less medium format. In 2020 4 rolls. In 2021 just 1 roll. In 2022 none. And I didn’t feel any urge either. But I still had quite some film stocked. That made me want a medium format camera I would actually enjoy using.

In the grand scheme of things, I am happy with the increasing popularity of film. It helps ensure availability. But the one negative side effect: film cameras have gotten quite a bit more expensive. I wasn’t aiming for Hasselblad, or something like a Mamiya RB67 –  they are expensive and always were. But cameras that were completely affordable a couple of years ago now cost enough. Pentax or Mamiya 645…  over allocated budget. Bronica – way out of the budget I set myself. Kiev or Pentacon…. more than I wished to spend. Basically, all of them were more expensive than I liked.

Except one. Hardly a serious camera. Certainly not famous for quality – neither construction quality nor lens quality.  Not dependable, not reliable. A Holga. The simplest 120N model with no features whatsoever. Cheap, even brand new. Utterly plastic and feeling like a disposable.

Oh come on. A toy camera of plastic. Ought to be the last thing to desire. Yes, there is a sense of discomfort around it. But the more I saw results from it, the more I wanted one. 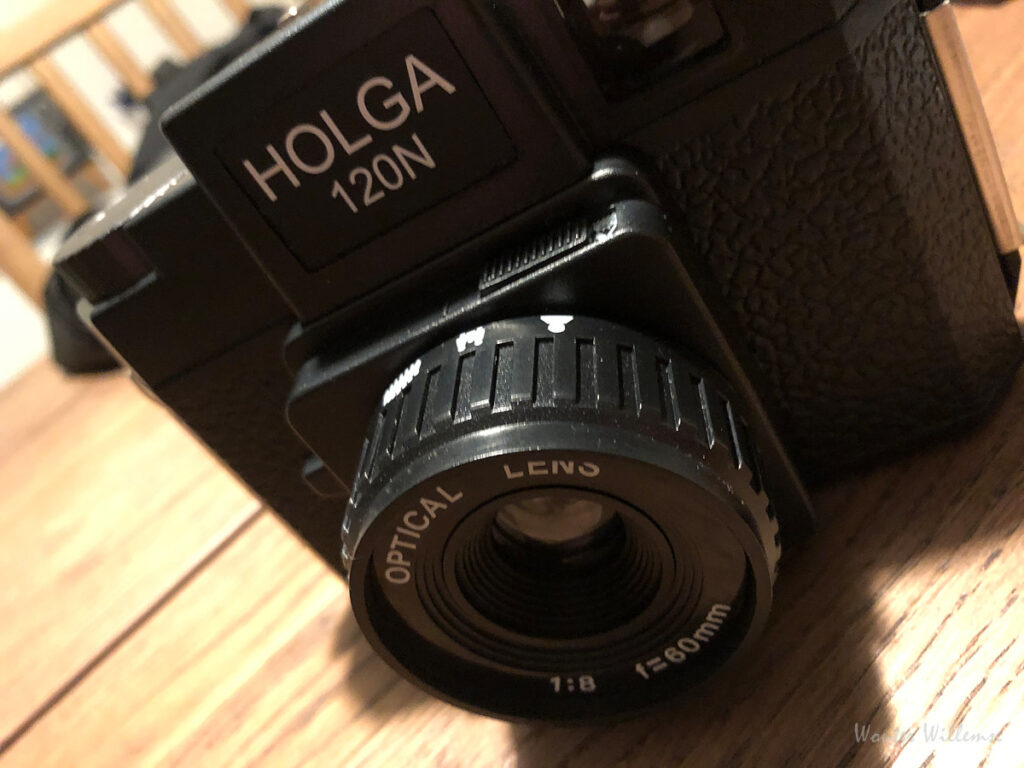 I guess the whole point around a Holga for me is that it’s not serious. It’s not taking itself serious – it’s beyond simple with minimal controls which are simplified. It doesn’t pretend to be anything but a pile of plastic. Nor does it pretend to be a good camera. It just is a toy, and toys are for fun.

With all that said, though, its flaws, shortcomings and unreliability makes for surprising results. You have to make use of those flaws, and consider your subjects to suit that. And that actually stimulates creative thinking. Maybe not the same creativity that a deadly serious camera pulls out of my brain, but all the better for it. It’s a credible alternative for different results.

And that I seriously like. That’s why I really wanted one.

A bit like a Lensbaby – but without the option to switch to a normal lens, and without knowing up front what will happen exactly. And square format. It’s also by far the most portable medium format camera, and my back is appreciating that too.

As said, it’s extremely early days. I shot one roll with it. 12 images. And they made me happy. Not because they’re so good, or special, or creative or anything. But because they do what I hoped for: be different.

These look relatively normal, though the edges never seem to be in focus, and the vignetting is very pronounced.

But shoot it with the light source in the frame, and things go up a notch.

And sure, those who say this level of quality is completely unacceptable are right. In their mind. As for me, I like how it adds a certain atmosphere.

Yes, it’s just one roll so far. This camera can still start to disappoint and annoy me. Even if it does that, it’s still good value for money. And I had more fun shooting this one roll than I have had in 5 years with my TLR.

Sure, don’t take this post too serious. It’s just a story of 12 images and a heap of plastic. Nothing the world needs: we have too many images on the internet already, and too much plastic too.

But sometimes not being serious just feels seriously better.