Hybrid workflow – it sure sounds a lot fancier than it is. What I mean with it is the roundtrip from film to digital to print. And that again sounds a lot less complicated than it is.

There is quite a lot of choices in the process, and multiple ways to skin the cat. In fact, it’s a recurring question on many photography forums. On the better forums you will get multiple answers, all valid. So what is what?

There is no single answer. The one and only best workflow doesn’t exist, so whoever is adament you should do things their way because it’s the best: do not trust that. There are good reasons why there are choices in the process.

What does exist, is the best workflow that works for you. I’ve got mine, and sure that leaves me biased in some areas. So any character that follows here below is also not the end-all-and-be-all. It’s the internet after all: loads of info, and as a reader you need to figure out what’s true and what isn’t. It is just my choice, and the reasoning behind those choices.

First of all – why? As I mentioned in several earlier posts, I can do darkroom printing at home. So why would I need or want to digitize my negatives first, and then potentially print that digital file?

Well, the first and most obvious reason is that not everything ends up as a print. I also share photos on this site, and for that I will need files on my computer. The digitized negatives also help select negatives for darkroom printing.

Aside that, I also just like having all (yes, all) negatives scanned to keep a complete archive. The catalog system I use to ‘index’ my photos is a mix of scans, mobile phone activity and digital camera output – I don’t want that split up in distinct seperate items.

Last but not least: due to space constraints in my darkroom, printing larger than 20*30cm is tricky. My printer goes up to 33*48cm, and can take very heavy papers too. So getting large prints on high quality paper, the inktjet actually has some advantages in my situation.

That’s the question where you get plenty choices: how to digitize images. Considering that I do shoot reasonable amounts of film, and that I do prefer to develop it myself, it makes sense to also digitize myself. Having it done would be costly and clumsy.

One of the easiest ways to digitize images would be to use my digital camera with a macro lens, and a setup to hold negatives flat and evenly illuminated. These solutions exist – both DIY solutions and pre-fab solutions which range from reasonably priced to less reasonable.
I’m sure it can work really well, but I already bought a film scanner before this option became well-known and digital camera high resolution enough to compete with scanners (since then, cameras clearly overtook scanners).

Dedicated film scanners are a complicated story. There are quite some choices available; but some make sense and some not. At low prices, there are those that scan directly to a SD card and deliver low-resolution JPEG files only. Avoid those if you’re serious about getting good files from your negatives.

Your scanner should need a computer to work, in short. There are flatbeds that can scan film; Epson has several models, Canon has the Canoscan 9000F Mk.II (at the time of writing). And finally, there are dedicated film scanners. These exist mostly for 35mm format, but at more astronomical prices they also exist for medium format (120 rollfilm).

The best dedicated film scanners are no longer produced; the ones you can still get new (Plustek, Reflecta/Pacific Images) are very viable options though. I started with a Reflecta ProScan 7200, and it served me generally really well. I did change it to a Nikon Coolscan V, though. The Coolscan is much older, much more expensive (even second hand) but better built, has autofocus and superior lenses and as a result, results are better. But this upgrade to the Coolscan was a luxury – I could have stuck with Reflecta and still be very happy.

For medium format I use a Canoscan 9000F. It’s nowhere near as good as the Reflecta or the Coolscan. Despite claims of 6400dpi or something like it, any scan above 2400dpi doesn’t really reveal any more detail. More scientific tests claim somewhere around 1700dpi and that seems about right. Since medium format for me is just a fun thing, I don’t care too much. To improve results from the Canon, I did get newton glass insets for the film holders of the Canoscan. Without that glass, the negatives won’t stay flat and that completely ruins any hope of quality. With the glass, decent results are possible.

Would I be a serious medium format shooter, though, I’d be saving up for something like a Coolscan 9000 – but yes, that is a serious amount of money.

Make no mistake – scanning is an extremely boring activity. It’s not fast, and some scanners/accessories are fiddly. The film strip holders of the Reflecta work well if you can be patient enough to align the strip correctly. Else, all scans will be slightly skewed. The automatic feeder of the Coolscan is ideal, until it doesn’t detect your film – and resorting to the film strip holder of Nikon (FH-2) makes you appreciate the design of the film strip holder of Reflecta.

The holder for medium format of the Canon is a wobbly thing, and as said above, without glass, it’s woefully inadequate at keeping film flat. But the glass adds another surface with dust….

It is, in short, annoying and time consuming.

There is also a learning curve to getting to know the scanning software well. All scanners come with their own software, but often enough such software is aimed at ease of use and hides too many options. Personally, I use Vuescan instead, and I get along with it fine. I have a ‘profile’ for each scanner so that I don’t have to recall settings too much.

My approach to scanning is to only capture as much info as the scanner allows, and as much surface as possible. No cropping, no sharpening, no adjustment of black point or white point. Just capture as much data as possible and save in a non-compressed file format. I use Vuescan’s ability to save as a DNG file for reasons I’ll touch on later, but for all intents and purposes those files are similar to TIFF-files. So, high resolution scans, 16 bits per colour channel or 16 bits greyscale. With colour negatives, slides and chromogenic film (XP2, BW400CN) I do use infra-red dust reduction, but for B&W film, this doesn’t work.

The silly step…. The DNG-files created with VueScan are the oldest version of DNG, and completely uncompressed. I use Adobe DNG converter to convert these files to more recent specifications of the DNG standard, and use losless compression to reduce the storage a bit. In this step, files get renamed so they’ll have unique filenames. Not strictly necessary, but it helps avoiding incidents in overwriting and such.

Next step: import into the catalog. My tool of choice is Capture One. I know Lightroom is a lot more popular, but personally I much prefer this software. It’s powerful, flexible and most tools work extremely well; it’s also a bit pricier than Lightroom but again, to me worth the money.

The import option allows to make a second copy, so at this point I create a backup of the files to a secondary location too. Backups are a subject in itself, but suffice to say they’re important. Very important. Once in the catalog, keywording and metadata to help me find the images back later in life.

The reason I use DNG is because Capture One doesn’t handle grey-scale TIFF files. As the vast majority of my scans are black and white film, the option is either use RGB TIFF files, which are 3 times as large, or use DNG. Even if hard disk space is cheap enough, the space saving is worth it to me. In any case, Capture One won’t write edits or changes to the file, so whichever format is used, the original file is untouched.

The level of processing depends of course, but the key items in this step are cropping, removing dust and dirt, fixing exposure maybe and finally sharpening. Dust is an unavoidable nuisance. Good wash after development and drying your negatives in a clean area helps. Handling your negatives with care and cotton gloves helps too. Still, you will see white specks and blobs on the scans. Capture One improved its healing brush a couple of versions ago, and ever since, this task of cloning out the dust is a lot nicer.

Sharpening is strongly dependent on the scanner. In the above images, the photo of the Canoscan has been sharpened a lot, while the Coolscan images get relatively little sharpening applied. It’s really just trial-and-error to find the happy spot for your scanner and your taste.

Beyond these simple edits, I tend to do little; especially film photos I like to keep as closely as possible to whatever happened when I squeezed the shutter on my camera. Maybe a bit misguided purism, but it’s just how I tend to do it. In any case, the file now sits in my catalog just like whatever I’ve done with my DSLR. In terms of workflow, at this point, there are no differences anymore.

Key point is that at this point, there is no difference between your film photo and your digital photo. Both are very similar files, behaving the same way. So the challenges posed by printing are the same. The requirements for sharing the image on this site or on social media are the exact same. Preparing them for cyanotype printing is the exact same.

The one advantage at this moment that the film photos have over their 100%-digital brethren is that I can still choose to print them in the darkroom as well. Capture One is my lightbox for selecting negatives too. 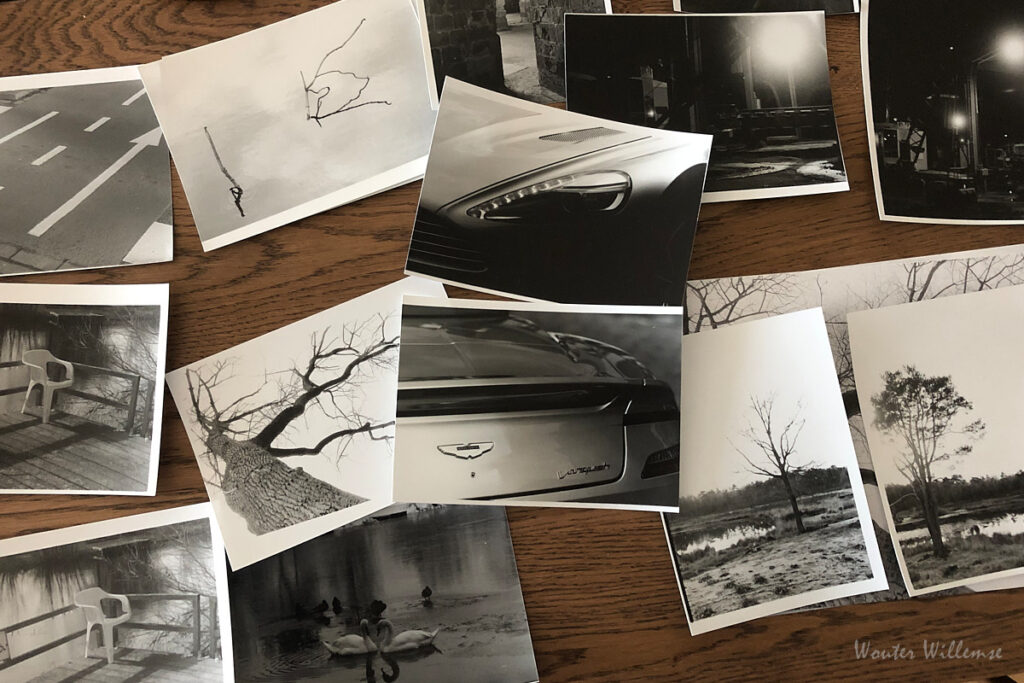 After a long story, it really gets me wondering: why? Digital suddenly seems so much easier. And yes, it is in many ways. This whole workflow most definitely is not the reason to shoot film. It’s pretty expensive, time-consuming and in parts a chore. But there are reasons to shoot film, for me. This workflow is nothing but a consequence. It took some time to get the workflow working for me, but this is how I do it today. It works for me. There are plenty other ways to do it, and those other ways may work for you. But perhaps you may find something here that helps you. And perhaps you have some tips too, or any questions… in that case, fire away in the comments.