As it is not the first post of this kind, a short recap only on the idea behind this post. Again, this post is just one man’s opinion on a single image. Nothing I’m about to write is anything but an opinion; it’s not true, false, correct or wrong.

The image today hasn’t been without controverse, so it’s not unlikely you won’t agree or simply dislike the image to follow. If you take offense to it, then please do remember what was written above: this is just some opinion of some random guy on the internet. It’s not personal at all.

I’ll quote again the key point about these posts:

I pick an image that provokes me one way or another, and just write about it as if I’d discuss it. Simple as that.

There is a comment section below, so feel free to disagree, agree or simply share your gut reaction. 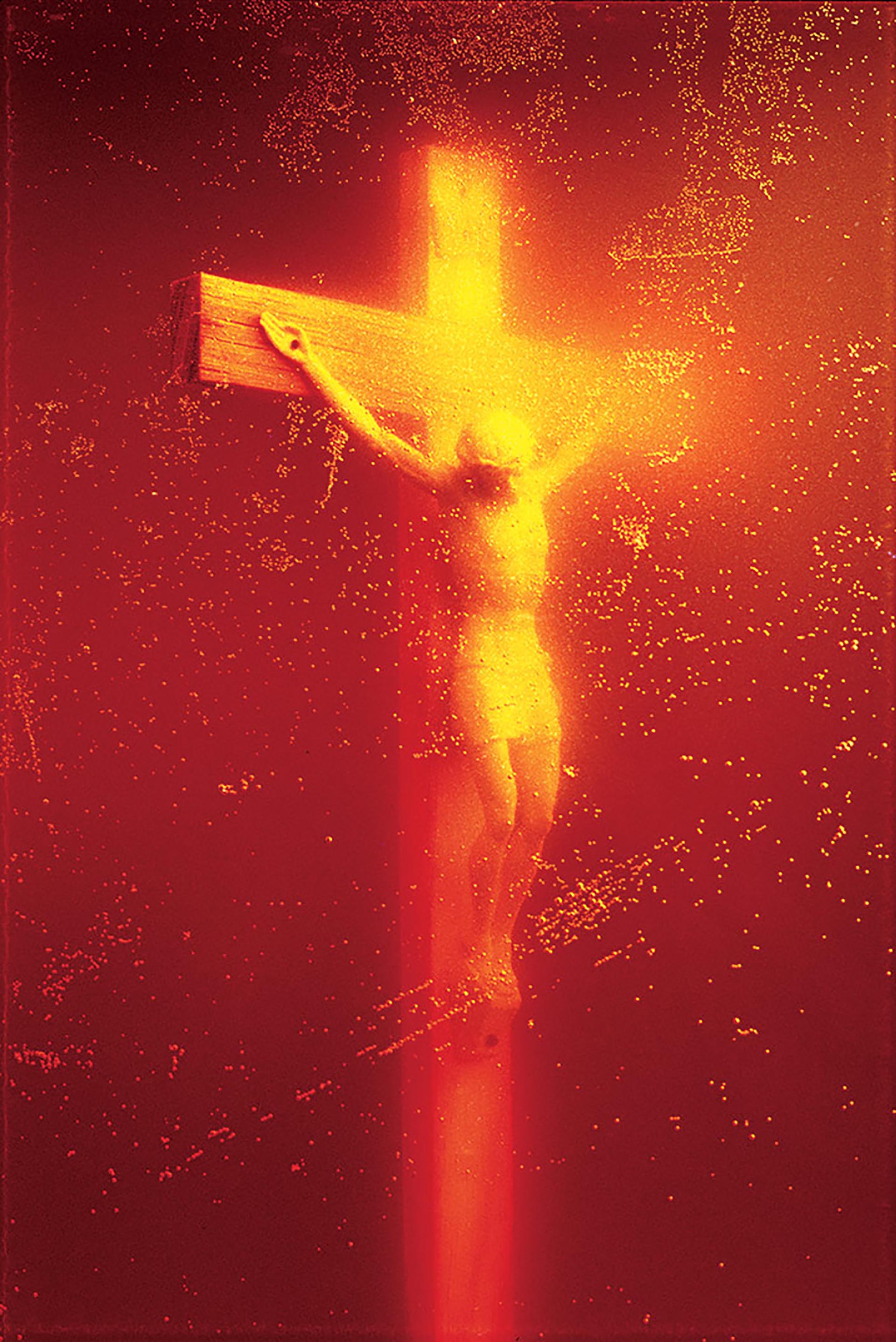 Yet again the choice isn’t terribly original, I fully admit that. This photo has its fair share of fame. But it hasn’t grown a cliché because of it. And the controverses around it means it’s not on the ‘Hot Top 100’ by universal acclaim either, since some people will loathe this image, as much as others adore it.

I left out the title and artist. Well, the artist is Andres Serrano. The title is coming later; this is an example of a work where the title is actually integral part of the work.

What do I see?

What strikes me most about this photo is the light, and second the colours. The light just has a particular celestial quality to it. It’s subtle, yet very much there. It may tend to being a bit too bright in places, but that also is part of that celestial quality. The light almost seems to come from within, rather than striking the scene from outside.

The colours are very bold and saturated, yet the image seems nearly monochrome. It’s not oversaturated. These colours I’d associate with happy things. If I’d go only by what I see on first glance, it’s more or less a quality of light I’d imagine for a revelation. A glow indicating pending resurrection, perhaps.

But there are funny streaks and bubbles disturbing that biblical image. It’s not clear what those are, so a question starts to pop up: what is going on here? Why did the photographer actually make this image, and how?

And that’s where things turn 180 degrees.

What do I read?

Sometimes it is important to just look at an image, take it in and try to experience it. Savour the emotions it evokes. I’m actually in favour of always doing this. Don’t rationalise too much too quickly. You have a lifetime to evaluate what you saw. You have only one split second where that first impression comes in.

Sometimes though, that rational side is equally important. For some works, you can only fully get their meaning if you read up on them.

The title of this photo is Immersion (Piss Christ).

Now that celestial quality of the light suddenly takes on a different meaning, doesn’t it?

Yes, it really is a crucifix immersed in urine. The photographer’s own, in fact. So, pretty obvious the photo caused controverse, as some found this blasphemy. To a certain level, I can get this, though I don’t think it is ever useful to feel offended by such things. And unfortunately with controverses like this, that is what happens. What I wrote above applies: it’s the just the opinion of somebody – it isn’t personal. So why get offended?

What is the point of the photo then? It never struck me as a photo designed to insult a religion or be intentionally blasphemous. The visual qualities I described above contradict that to me completely.

And reading on merits, as you will find out that the artists states he is a Catholic and isn’t anti-religion. The image does not denounce the religion or accuse it in any way. It does reflect on how religion is commercialised and cheapened in modern culture instead, according to statements made by Serrano.

Yet, those who see this photo as blasphemous felt it necessary to send him death threats. Very Christian, to wish somebody death, but I guess such irony is lost on those who resort to this.

At the very least, though, it is a very ambiguous image. On the one hand, its visual qualities, on the other hand what we know about how it’s made: it may raise conflicting emotions. Ambiguous isn’t a bad thing – far from it; it does mean the viewer has an active role. The act of forming an opinion becomes a part of the work too, in a way.

What do I think?

So let me be simple on this one: I love this photo. In nearly all aspects.

First of all, visually I find it extremely appealing. Slightly mysterious, that epic light, and that slightly disconcerting distortion because of the bubbles, the colours that just seems to work right. Second, it rewards you for taking a bit more time for it, to catch the title, read up on the artist’s opinions, and most critically: think about it. That’s not a bad thing ever.

As a total – photo and backstory – it shows you that a photo can be more than just what it shows. That you do not have to take literal what you see, and leave it at that. And that ambiguity can be a fascinating thing because it forces you to think about things, for yourself. Approach it open-minded, and this photo poses a question, not an answer.

In nearly all aspects…. it is a bit bold, and to think this photo wouldn’t cause controverse seems a bit naive. Personally, I am not very religious and cannot feel offended by statements like this. But I’m also aware enough that others will feel offended. That in fact is my one doubt about this photo – but is that the photo’s fault, or long toes that are impossible to miss when stepping on them? Is creating a controverse a smart way to start a discussion? Not too sure on that.

Back to the gut

I ended the previous posts with more of a gut opinion than a rational one. This photo, that is impossible. What I especially like about this photo is that it requires both gut and ratio. There are the pictorial qualities, and there is the background story. Both are equally vital if you want to “get” this photo. This perhaps seems to go against the ideal that the image should be able to stand on its own, and do its own talking. Though I’d argue the photo is pretty and mysterious enough to do that as well.

Controversial? Yes, but is this image controversial, or the people calling it blasphemy controversial? My guess, a bit of both, though action and reaction were somewhat predictable. That said, all of that discussion adds to what this photo achieves. To me, anyway.