Previous posts may not have make it seem that way, but my main cameras are Nikons, not Leicas. When I moved to a DSLR, I went for a Nikon. In time, I got a couple of older manual focus lenses for it, including the fantastic 105mm f/2.5. When I added film cameras to the mix later, it made sense to go for Nikon, as I already had lenses for it.

Today, still my DSLR is a Nikon, and for film I have a set of cameras with enough lenses to keep me entertained.

Some lenses I’ve sold too. At some point, I found I had way too much gear and it got in my way. Shall I go out with the FM2 with those lenses, or perhaps bring that one but then I need a larger bag… or go with the R6 with completely different lenses? Or keep it simple, just the Canonet? Or… or… or…. oh wait, it’s dinnertime by now.

Suffice to say, I am not a collector. I don’t need lenses on a shelve, they have to be used, otherwise somebody else should enjoy them.

So the lens I’d like to put into the spotlight today is one that didn’t survive that selling-spree. The reason I sold it was to really rationalise my film-Nikon setup. I figured the 105mm together with a 35mm would do the trick. Everything between those focal lengths could go.

I guess I forgot my favourite focal length is 50mm. Ooops. I sold of a pristine sample of the luxury superspeed 50mm Nikkor. Sure that’s got to hurt. 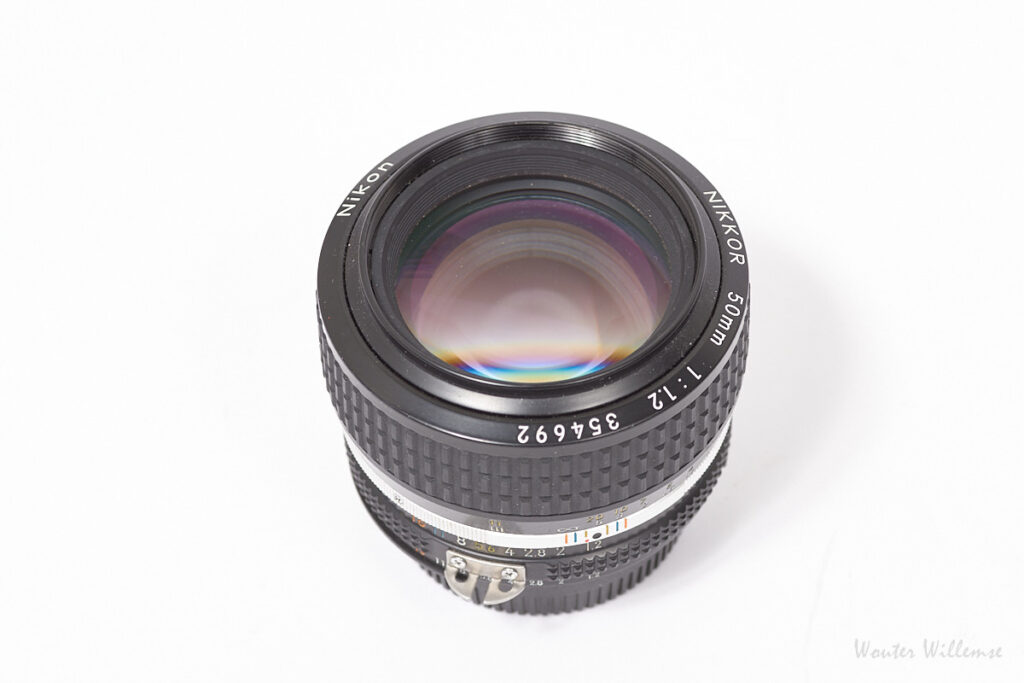 I mean, mine was really in excellent condition. When I bought it, it was like new. And while I’ve used it a lot, there were little to no signs of that. 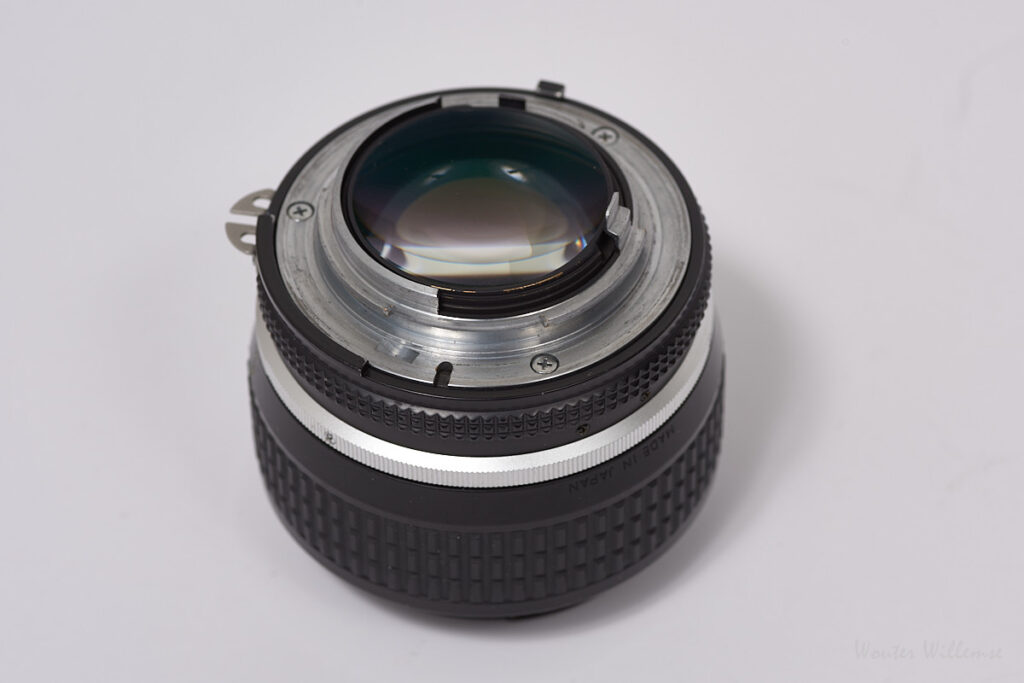 Its bulging, large and quite vulnerable rear element in perfect shape. I mean: pristine, excellent condition.

And most important: it’s a seriously good lens too.

It’s rather weird I keep writing about gear I sold where somehow it doesn’t seem to make sense to sell it. Partially, it is true for this lens too. But the fact that I already wrote in an earlier post that the best SLR 50mm lens in my opinion is the Summicron-R 50mm is a bit a giveaway that I don’t believe this lens to be the best.

The second part weird insanity is the reputation of this lens. It is a marmite lens. Very often I read it isn’t very sharp and that it’s hard to justify the additional cost over its slower brethren.

And I feel the reputation isn’t entirely justified. Yes, it’s a bit of a character and some of its behaviour takes some getting used to. But by far most of it, it’s just a very well-behaved good lens.

Like nearly all lenses of its vintage, if you want solid results you need to stop the lens down a bit. This lens is solid from f/2 on basically. And solid here can be read as “very high performing lens”.

It resolves plenty detail, contrast and colour all fine. No insane amounts of vignetting, flare is reasonably controlled (considering I never had a lenshood for this lens).

What is really nice for film photographers about most Nikkors from this time: they all share the same filter-size (52mm). This size filters is easy to find, not very expensive and you only need one set for all your lenses. This lens, despite its huge aperture, still can use 52mm filters. Sweet.

It should be better than the 50mm f/1.8G, as it costs nearly twice for a used sample versus a brand-new f/1.8G. Compared to the Summicron-R 50mm, it is about as expensive or slightly more expensive typically. It is not a cheap option.

It is not a big lens, slightly heavier than you’d expect but not at all heavy. The rear element is very exposed and feels vulnerable like that. Definitely worth making sure the rear lens cover sits snug and tight.

That’s not a whole lot of bad, but unfortunately it’s not that easy. While most of its performance is really good, there are some rough edges. As said above, this lens is a tad marmite. And where it shows character, it ends up being a bit a complicated character that isn’t exactly easy-going.

You don’t buy a f/1.2 lens to shoot it at f/8. If that’s what you want, save yourself a lot of money and get one of the cheaper lenses. So, what is this lens like at wide open aperture?

That’s where things go difficult. There are two sides to that: how does it render, and how well can you focus it? As it happens, both these throw you curve-balls.

So, looking at performance and rendering at wide apertures, it is a mixed bag. It doesn’t appear very sharp, yet there is quite a lot of detail when you pixel-peep. But it all seems clouded a bit. Some sort of glow-in-the-dark look. That effect is more visible on shorter focus distances – on longer distances it just starts to look less detailed and sharp.

This look at close focus distance can be lovely with the right subject. However, on digital cameras the effect was quite strong which rendered it slightly less useful. On film, it seems a lot less pronounced. In either case, it’s not something for every day.

The real issue for me however is focussing it well. Nailing focus manually at such a wide aperture isn’t easy as it is. Especially newer cameras tend to have prismas that show more or less the equivalent of f/2.5-2.8 depth of field. So you cannot really properly judge what and how much in the image is sharp.

Add to that some focus shifts between f/1.2 and f/2 too, and on a whole, this lens isn’t easy to focus. Not a lens to use in a hurry, and you do need a camera with a good, bright viewfinder. Using this lens on a F3 with its huge and bright viewfinder was not that big an issue. But on the DSLRs it was a bit more hit-and-miss.

A rather funny thing: the f/1.4 performance to me always seemed slightly worse than f/1.2. That stop on the aperture ring for me just as well could have been missing. I attributed this to the focus shift, but honestly don’t know for sure.

Not all marmite is alike

The rendering issues that this lens has are no issue to me as such. The glowing look can be very nice with the right subject. The problematic backgrounds is a matter of judging the background properly. You can make such flaws work for you.

As said above, on film the effects seem pretty tame, but on digital it could be very outspoken. The problems with focus were worse on digital camera (D700 and D810 both having pretty bright and large viewfinders) than on my film cameras (FM2 is OK, the F3 was as large and bright a viewfinder as I ever saw). So, a perfectly fine lens on film, and a bit a handfull on digital?

A bit a handfull on digital? No, it’s a bit worse than that.

Other lenses from the same era can show similar effects, but a bit less and slowly reducing those effects when you stop down. With this lens, it is an on/off thing. Use it wide open (of f/1.4 which for all intends and purposes is the same thing) and you get the particular rendering in full force. Use it stopped down to f/2, and you get a perfectly normal lens with above average performance.

It needed a step in between, but no such luck. As a result, I used the widest apertures very very sparingly. Just too much of a guess to get an effect that was stronger than I liked.

And there is why I have never really regretted selling this lens. Yes, it is a very seriously good lens, from f/2 on. Below that, it’s an extreme speciality item that somewhat often doesn’t deliver the result you hoped for.

I was perfectly happy with this lens while I had it. I do believe it is one of Nikon’s finest 50mm lenses. Definitely a step above the 50mm f/1.4 lenses, and the older f/1.8 lenses. It gives the much newer 50mm f/1.8G lens a good run for its money.

Unfortunately I never had the oppurtunity to use a NOCT-Nikkor 58mm f/1.2. Probably that’s the lens that would solve my niggles here. But at a steep cost, and I’ve never felt tempted to go there.

I really liked this lens when I had it. It has been my go-to 50mm for all the time I owned it. But the way I used it, it was essentially a 50mm f/2 with a special effect filter for occassions called f/1.2. And looking at it that way, it’s a fantastic lens. Its main problem is that other lenses exist that just work better for me – and that probably says more about my use than it does about the lens.