In an earlier post, I shortly touched on the importance of ergonomics in a camera. With the increasing complexity of cameras, the topic has only grown more important. A well designed menu helps the user find that setting, no matter how esoteric it may be. A poor designed menu blocks the user from finding even the most important settings.

A good hand-grip avoid the muscles in your hand to go tired or stressed. A poor one will have your hands trembling after a while. Seriously, there is no underestimating the importance.

Honestly, for me, it’s the difference between wanting to use a camera, or not. And the point of owning a camera you don’t want to use… that’s beyond me. I’ve had and still have a decent amount of toys, but I’m not a collector. The cameras I buy, I buy to use.

Some fit me as a glove ergonomically. Some don’t work for me at all. And some are really “you give some, you loose some”. Tales of brilliance mixed with mistakes.

A first step in consumer-land

There have been multiple cameras where I felt the overall design was ultimately held back by some debatable ergonomic  choices. But none of them has had me considering this topic as much as Nikon’s first attempt at a consumer camera: the Nikkormat FT. 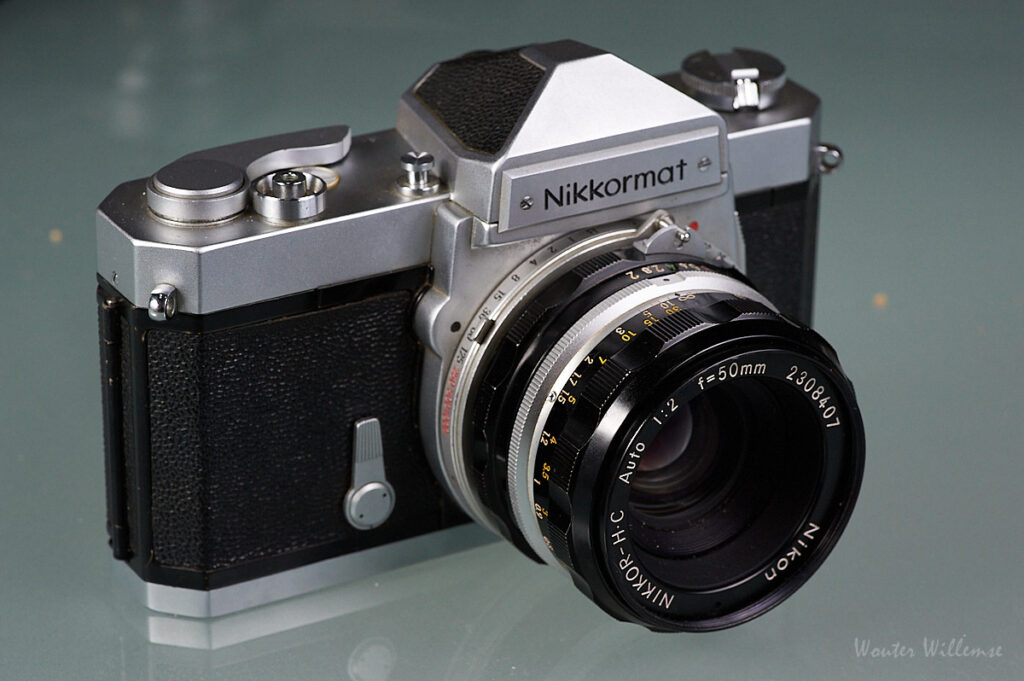 Mine was a FT, the initial model produced between 1965 and ~1968, before it was replaced with the (now more common) FTn. Initially, I bought it out of curiosity for the 50mm f/2. Getting this camera with lens was cheaper than getting just the lens in Ai-disguise (so it would work on my other Nikons). I’m pretty sure I’ll be talking about that lens some other day.

As the lens was a pre-Ai one and all my other bodies won’t take those lenses, I had to use the Nikkormat FT. And I used it very infrequently, enjoying it mostly. It does a lot right. Yet, the past tense probably makes it obvious: I no longer own this camera or the lens.

Yet, I feel these cameras are very underrated – even if I ended up selling it for reasons which are part of the topic here. I sold it for the same price I bought it, which happens to be the same as what I paid for a Ai 50mm f/2, and that’s half of what you pay for a Nikon FM. Surely it’s undervalued.

The mention of the Nikon FM isn’t casual – this camera is in many ways a sibling. But the Nikkormat is the older sibling, from older times.

This camera is a solid brick, built to a very high standard. It’s mostly all metal, even in parts where later cameras (including professional models) increasingly used plastic parts. Take the rewind knob – just really pretty and really metal.

Mine felt mechanically completely smooth, which isn’t a given for a 55-year old camera. Tension on the release-tab to open the back was like new – it closed with certainty and it sprang open with certainty. Shutter felt very responsive, a crisp and immediate slap. Really all very smooth, very enjoyable. It oozes quality, by the kilo.

A Nikon FM doesn’t feel as substantial, and that’s probably because it’s not as substantial. Mind you, a FM is not a featherweight. But the Nikkormat is really not light, not by any stretch of imagination.

The viewfinder – large, clean, clear. A joy. Not the best I ever used (that would be the F3 with the DE-2 finder), but not far off.

Beyond that, shutterspeeds available match a Nikon FM, so no winner there. So, a lot cheaper than the FM, built to last, smooth reliable inner workings. What is not to like?

A child of its time

Two minor niggles worth mentioning. The lightmeter needs mercury cells (PX-625), which are harder to get, and more expensive. This to me never has been an issue, though. A hand-held light meter is more reliable than a 55-year old integrated light meter anyway.

The second niggle could be the way you need to mount lenses on these bodies, for the aperture coupling. The rabbit ears need to meet the pin to couple the aperture for the lightmeter. But I only used this camera with one lens, and didn’t care about its metering. So to me, this niggle was a non-issue.

Later cameras do however solve both these points. It’s the price for using an oldie.

The real reason I do not longer own this Nikkormat FT is ergonomics. And at the same time, the Nikkormat FT has an ergonomic solution I’d wish later cameras would have kept.

Let’s start with the bad.

Now, that is part of the feel of quality. But a FM or FM2 makes an utterly reliable workhorse, dependable as can be. Weight does not necessarily equal reliability. Yes, it feels incredibly well-made, and it is incredibly well-made. But it makes you feel that. All the time.

Now that wouldn’t be too bad, if it wasn’t for the shape of the body. Some of its edges feel/seem somewhat more pronounced than the later cameras. I found it a less comfortable camera to hold. The weight worsens that.

I’m well aware that these designs, without a handgrip as modern cameras have, are different to hold. They don’t quite follow your hand and you need to clamp the camera more with your hand to hold it steady.
This camera just didn’t accomodate this well for me. It’s got as much to do with the size of my hands and my habits, as it does with the actual design. But it made me leave this camera at home more than its qualities as a camera warranted.

And strangely, at the same time, this camera has something which I feel is a stroke of genius, not found on later cameras.

This post is already deep into geek territory lamenting esoteric usability issues on a very old camera. It now will get worse.

In my little ideal world, the ideal camera allows me to keep my eye on the finder while changing the key settings (shutterspeed, aperture and focus).

The only cameras in my stable that achieve this (or have achieved this) are my DSLRs. The film cameras all fail on at least one point, and it’s typically the shutterspeed control. A rotating wheel on the top of the camera (as found on the Nikon FM that acts as reference today) is often too recessed to change its setting from the front of the camera. Changing from the back would have to be the thumb, but then you can no longer hold the camera stable.

It’s no disaster, but it’s not ideal. And the sad part is: the Nikkormat FT solved it. Most elegantly, functional, easy to use. 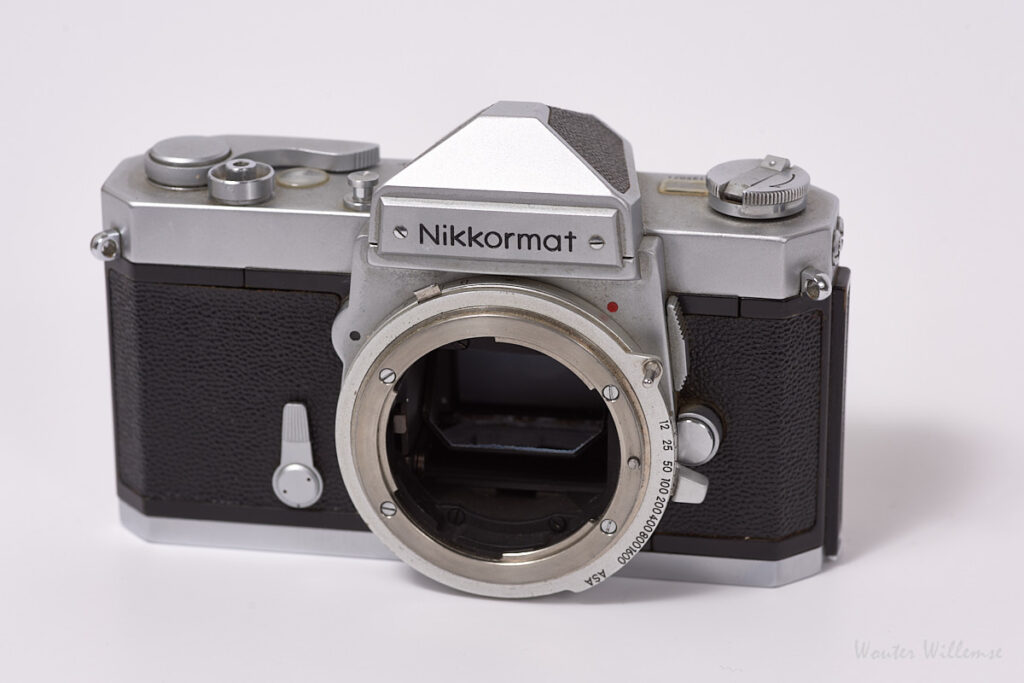 Behold, the nude lens mount of the Nikkormat, with on the left visible the ring with ASA markings on it. Behind it sits a second ring, with a little tab (visible on the left) that can be used to rotate it with one finger. Yes, that’s the shutterspeed ring.

Clear, distinct click-stops, so you feel when you changed the speed, and by how much. And it sits exactly where you already have a free finger, if you hold the camera normally.

It is simply brilliant. It works perfectly. Why didn’t this stick?

Sure it is far too geeky to fuss over details like this. Perhaps. But details like this can make a camera a complete joy to use. A solution like this on the Nikon FM2 – that would make it a pretty much perfect camera for me.

Ergonomics matter. Making using a device a nicer experience, will make people happier. Happier customers increase your chances on a loyal fanbase. So, as a manufacterer, it’s worth the time investment. As a user, the advantages are obvious. Win-win.

The Nikkormat is just an example of how delicate that balance can be. It offers a better experience for one of its key controls (there aren’t many) than most other similar cameras. And it offers it in a casing that doesn’t feel right in my hands.

The mere fact I don’t own it anymore will not worry Nikon – I’m fairly sure the next owner has fun with it as mechanically, this camera won’t fail you. And I’m not lost as a customer either (still have a FM and FM2, will talk about them later some day). And I don’t expect them to re-introduce a shutterspeed ring around the mount anymore – current cameras got it right with the front and rear control wheel.

But if you’re looking for a camera… just remember: ergonomics matter. A lot. And if you don’t mind the weight of a camera, the Nikkormat FT is a bargain.

Yes, I will get back on that 50mm f/2. The last image isn’t showing off much at all (except 5 cyanotype prints that I’m pretty proud of), but I think the rest of the samples do give it away a bit. What a lens.